The mood was somber at the  Finance Committee meeting at PSTA headquarters on January 18th. As the Guardian previously reported, ridership in the just completed fiscal year is down 15% in two years. The plunge continues in the new fiscal year, and is headed for a 22% ridership decline over three years. 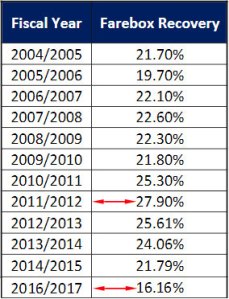 Passenger revenue is also plunging. “Farebox recovery” is the industry term for the percentage of operating expenses that are covered by passengers fares. That percentage has dropped from 28% to 16% in just five years. The taxpayers pick up the rest of the cost, as well as all of the the capital costs (e.g. new buses) Only $9.5 million of the $59 million in operating expenses are covered by passenger fares.

Of course, none of these key metrics were discussed at the Finance Committee meeting.  Only the most recent monthly ridership reports were considered.

Still, the data before the committee was enough to cause a somber mood among committee members, and long periods of silence. The entire 18-minute discussion about plunging ridership can be seen and heard here.

The discussion failed to explore the key reasons why people are electing to not use transit. However, an anecdotal insight was provided when former PSTA board chairman Bill Jonson related his experience last June when he tried to use PSTA on a more regular basis.  “I got soaked in some rain”, Jonson said, who had to walk a mile after he “missed a connection.”

“You should’ve called Brad [the PSTA CEO] and had him come pick you up,” responded committee chairman Brian Scott, followed by laughter from those in the room. Mirth had already preceded Scott’s comment, as board members and staff acknowledged that their willingness to ride PSTA would depend on the weather. They laughed heartily about their weather-dependent willingness to ride a PSTA bus..

None of the people in the room actually use transit to get around. They only do it when they want to study those who do.

Transit ridership is declining nationwide because of a multitude of factors, which include ridesharing, low fuel prices, and telecommuting. In an October policy paper, Cato Institute transportation policy analyst Randal O’Toole predicted a coming “transit apocalypse” caused by those factors as well as maintenance backlog and unfunded pension and health-care liabilities.

O’Toole told the Guardian that the factors at work will take away “most, if not all, of transit’s ridership.” The question then becomes: why do we subsidize transit at all using tax dollars?