The coronavirus outbreak has caused police agencies across the nation to rethink how they enforce laws. Thousands of officers from New York to Los Angeles are contracting the disease, many are dying, and every jail is a potential incubator.  Law enforcement is learning the necessity of social distancing, leading to fewer citations, fewer arrests and less physical contact across the board.

In Pinellas County, Sheriff Robert Gualtieri claimed last month that due to the pandemic, arrests in the county have decreased from 130 arrests per day down to 30. On March 16, 2020, Gualtieri sent an email to all police agencies in Pinellas County requesting that officers use “good judgment and decision-making” on whether to make an arrest that would result in a jail booking. Gualtieri pointed out other options, such as notices to appear in court, which “carry the same weight as an arrest without requiring a jail stay”.

Which raises the question: why were these people being arrested in the first place?

According to publicly available data, well over 2/3 or those booked in the county jail were arrested by PCSO officers. What legitimate law enforcement purpose do these arrests by the Pinellas County Sheriff’s officers serve if  other options that “carry the same weight as an arrest” are available? Pandemic or not.

If Gualtieri is only now asking these officers and deputies to use “good judgment and decision making,” what were they using before? Their previous actions resulted in 333% more arrests per day than now. Were the officers previously using “bad judgment” and “poor decision making?”

Put another way, and by Gualtieri’s own admissions, approximately 77% of the arrests made in Pinellas County on a normal, non-pandemic day are totally unnecessary. That’s 36,500 arrests per year in Pinellas County alone that serve zero legitimate law enforcement purpose.

It costs approximately $95 per day to house an arrested inmate. Many of those arrested are held for days, weeks or months if they cannot post bail. If we make a low estimate that every unnecessarily arrested person on average spends one day in jail, that would mean $3.5 million per year wasted.

However, that is just the cost to house them . It doesn’t include the officers’ time, labor for paperwork, and other expenses associated with an arrest.

An arrest only means that you were taken into police custody and temporarily held by the police. An arrest is not a finding that you are guilty of a crime, or that you have done anything wrong at all.

After you are arrested, the prosecutor decides whether to charge you with a crime. You may never be charged with a crime. If you are charged, the charges may later be dropped or dismissed. Finally, you may be charged, go to trial and be acquitted (found “not guilty”).

However, an “arrest record” stays with you forever, even if you were never convicted of any crime. Often, employers perform a criminal background database search which includes arrest records. These records do not expire for a person’s entire lifetime.

An arrest record will harm your chances of employment and prevent you from obtaining certain jobs and blocking you from entire career fields. An arrest record can have lifelong harmful and damaging consequences, even if you are 100% innocent of any crime. And Sheriff Gualtieri does this intentional and unnecessary harm to over 36,000 people in Pinellas County every year. 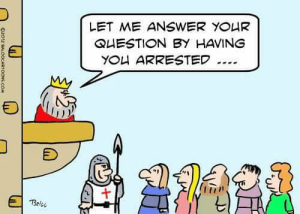 Such a policy creates a large segment of “criminalized” society, whose employment prospects and the ability to earn a decent sustainable wage have been permanently damaged. If people cannot earn a sustainable income, then they may resort to committing crimes like burglary, theft or robbery.

Gualtieri has thus been creating a massive disenfranchised segment of our community through needless arrests.

The process of kidnapping, chaining and caging human beings is an outdated and medieval approach to dealing with minor non-violent offenses. Making these avoidable arrests is also a danger to both the citizen and the officers themselves. Hundreds of people are killed, and hundreds of thousands more are injured during arrests, including police officers.

There are no benefits to any community that permits, allows or condones these abusive arrest tactics. No person’s arrest should be on their permanent record unless they were convicted of the crime for which they were arrested.

The coronavirus has created a new world order overnight and has changed how we deal with so many aspects of society. Perhaps the realization that, as a society, we allow far too many people to be kidnapped and caged for no good reason is one of the few bright spots to emerge from this pandemic.

If Sheriff Gualtieri intends on returning to needless and harmful arrests after the coronavirus has passed, then Pinellas County deserves a new Sheriff who won’t continue this harmful practice. That change should take place in this coming November’s election.

This opinion piece was authored by James McLynas, a candidate for Sheriff in Pinellas County this year. The views, thoughts, and opinions expressed in the text belong solely to the author, and not necessarily to any other group or individual.

As always….our readers decide. Like our Facebook page to find out when we publish articles and other material.